“He told me that the artist, especially the writer, from time to time is obligated to search out a hospital, whether it is actually a hospital or perhaps a prison or a monastery. That is an unconditional requirement. The artist, especially the writer, who does not search out a hospital from time to time, that is to say, a life-changing thought region absolutely necessary for his existence, in time gets lost in worthlessness, because he is stuck in superficiality.”
— aus: Thomas Bernhard, Breath, Berlin 1983, p. 234

I. Contemporary art criticism is tormenting itself with the attempt to find a justification for the existence of painting, that art form whose death is so frequently pronounced. In spite of all the diagnoses of the imminent death of painting, painting still happens, and it seems that the question of why or even if we need painting nowadays urgently needs clarification. The spectrum of these answers extends from the “l’art pour l’art” type of attempts to categorize painting as the last refuge of “unalienated action” (1) to the other extreme of emphasizing the theme of painting as a medium, which leads to rejecting the notion that the canvas can be considered an isolated aesthetic phenomenon (2). The difficulty in all these strategies for vindication of painting seems to consist in the impossibility of making demands for innovation on it and in its continual undermining of our belief in the progress of art. Nevertheless we seem to be unable to let go definitively of painting, and evidently it is that fact which causes the most concern.

II. Ute Pleuger has been painting images of faςades since the 80s. For her, the faςade is not a stage for events independently happening behind it which need to be described, but the glance looking at the faςade itself is the theme. Therefore, while looking at her images I had to think for a moment about Alfred Hitchcock’s film Rear Window, which also makes a theme out of the glance at the faςade opposite the viewer. Hitchcock’s film draws its vitality from the tension between the absolute absence of anything happening here, where the protagonist is condemned to motionlessness, that is, just looking, and the complicated, extreme events happening over there behind the opposing faςade. The only bridge between the here and the there is that longlasting look, for that faςade opposite the protagonist is essentially related only to the other and has nothing to do with the protagonist’s world as such. Ute Pleuger is also concerned with that “there,” but not with events taking place behind the opposing walls, but rather, with the abstracted quality of the faςade in its own spatial constellation, its relation to the surrounding space, and finally, the continuum between the work’s surface and the space internal to it. Thus it is that there is no indication in her images of faςades of human beings, whose individuality is increasingly erased. The faςades which Pleuger defines are dehumanized and anonymous, and in connection with the principle of the serial nature of her faςades, they reveal to us a brutal reality of the alienation of human beings from their environment.

The fact that Pleuger has devoted herself to one and the same motif for about a decade may seem remarkable in our age of impermanent digital images. The repetition of the motif and the serial nature of her images seem to want to repress this impermanence. Ute Pleuger paints further and further beyond the glance at the faςades, and the peculiarity of painting in comparison with photography consists in this fact, that painting is always already a decisively constructed appropriation of the world.

The reduction of the reproductive aspect, which she achieves through the renunciation of details and the reduced palette in her painting, is hypertrophied in her stamp images on packing paper: the elements that constitute the faςades are transformed into individual “stamps,” that is, geometrical print molds, out of which the faςades are put together. Pleuger is here concerned with the boundary between reproduction and abstraction, which she describes as “illusionism” on the one hand, and “exemplarity” on the other. Here two different modes of perception are intended, that of recognition and that of seeing as an “apperceptive activity” (3). The serial nature of the elements of the images drives forward their abstraction; the faςade is subjected to a systematic ordering which results in the repetition of the individual elements of the image. Pleuger’s immersion in Messiaen’s music is here relevant, which suggested to her the principles of emphasizing the systematic aspect of her images. The projection of a spatial atmosphere, which the organ as an instrument achieves with its wide-ranging spatial embrace and its polyphonic character, is one of her goals in her painting.

The difference specific to painting relative to its appropriation of the world corresponds to how it emerges successively. While Pleuger is asking what modalities of spatial representation painting can offer, at the same time, she is making use of a set of techniques that belong equally to photography and film: the close-up, the enlargement, the detail. Through the impossibility of encompassing the totality of the image and the necessity of seeing into it gradually, through the utilization of different observer’s standpoints within a single work, through pushing forward the boundary between abstraction and recognition, through the apparently asymmetrical shifting of the shapes in the middle of the faςades (in her polyptychs), the resulting perception of her paintings has a certain similarity to the perception of a film, where the eye of the observer is continually in motion (4).

The observer is even more forced to bodily movement in the Rotunda, which seems to actually require being moved around. There, just as earlier in the Hospital and the Parking Garage the visual habit of perspective is disrupted, as the shifting of the vanishing points in the individual faςade elements that constitute the image causes an imaginary turning movement in the observer’s standpoint. There is no longer a fixed standpoint in front of the image, and it is this lack of spatial anchoring that causes such discomfort in viewing Ute Pleuger’s austere spatial representation of the faςades.

Amid the current discussions about the end of painting, which are by no means anything new, as we previously noted, the aspect of thematizing painting as a medium has been somewhat exaggerated and has been brought into relation with the history of a “reflexive and self-analytical enlightenment within painting” (5), which began early in the modern era and was catalyzed particularly by the invention and popularization of photography. But what painting is able to achieve is to create distance as a kind of “filter” by abstracting from reality (6). By involving us in the “there,” as we move into the painted world facing us, we can also look out of it at the world. Today, painting can be used as the “trusted vehicle for camouflage and last refuge for the myth of individuality” in order to “deconstruct the illusions of the present day (7).” 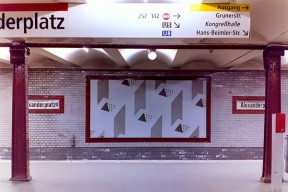 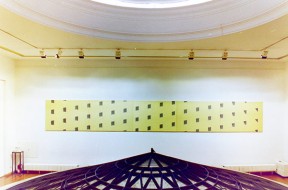 (1)Cf. Raimund Stecker in dialog with Martin Henschel und Heinz-Norbert Jocks, in Against the Violence of the New, and the Adventure of Painting, in Kunstforum International, Vol. 131, August/October 1995, pp. 268ff.

(3)Cf. Wilhelm Worringer, Abstraction and Empathy, a Contribution to the Psychology of Syle, Munich, 1916.

(4)Cf. Paul Virilio, The Negative Horizon, Munich 1989. Virilio establishes that film for the first time “realizes the unity of transportation and media machines,” as film is not just a vehicle for representation, reproduction, and storage of moving objects, but also creates new perceptions through the movement of the observer’s eyes.