Ute Pleuger’s linoleum cuts are seemingly simple rectangles, externally modest-looking, reduced to the most basic problematic. Their clearly defined, structured form constitutes a polar opposite to the wild type of expressiveness of the color-saturated graphic works of the 80s. The starting point for the development of these lapidary prints is Ute Pleuger’s search for a more effective medium than painting for the representation of her house faςades and window images. The linoleum cut, at first merely an experiment with a new medium, has since become an integral element in Ute Pleuger’s work. It makes both the required precision and distance from painting possible, as well as the renewed inclination toward it.

The artist calls her prints stamps. Close observation of her works reveals that this nomenclature is appropriate in a variety of ways, an impression which the examination of the entry under stamp in a current lexicon reinforces: “a device for the printing or impressing of brief notices, of special instructions, data, or particular graphic representations in the same recurring form.”

The formulaic language of these prints arises from a single motif and makes do with very few elements, for example beams or rectangles. The individual forms are placed beside and above each other on gray packing paper in regular intervals and fill up the paper all the way to the frame. The constantly recurring rhythm, the repetition of the same concise forms, seems to suggest infinity. In principle, these forms could be further extended vertically and horizontally and endlessly continued. The rhythmic alternation of gray paper and black stamp moves the observer into a contradictory experience of perception, between the visible, that is, what is present, and the conceptual, that is, what is hidden.

Fidelity to the object is not Ute Pleuger’s main concern in her house faςades, which she almost always represents from an extreme perspective from the side or from below. She is much more interested in the reduction of their characteristics, which she intensifies into abstract elements. The recurrence of her motifs in series makes one especially notice the slightest change or deviation, pay close attention to the tension between the elements and finally almost forget their object. The images achieve the status of signs. This sign-like nature could harbor the danger within itself of causing one to be distracted from the constructive and conceptual aspect of the works and to be misled into just perceiving them as signs. But even though the motifs are only the occasion and not the goal for Ute Pleuger, they are not arbitrarily interchangeable either. A bit of materiality and fixed objectivity still remains present. The order of her images relates explicitly to an anonymous lived world and its perception. In reality, just as in her works, any change in an individual element determines a change in the whole. Everything is condemned to immobility. Everything must run along a predetermined path. Nothing is allowed to dance out of its place in the row. In this way the large-format stamp images of Ute Pleuger exaggerate the real meaning of conceptions such as row-houses and rows of windows. The artist succeeds by means of her strict principles of composition in achieving a high degree of expressiveness.

The correspondence between the materials selected (gray packing paper from a roll, black stamp impressions), the motifs (faςades, windows), and the artistic composition (ordering in rows) gives her works a great power of persuasion. It is in fact this sense of correctness that constitutes an essential part of the quality of her work. 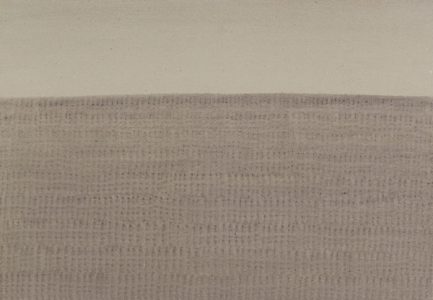