The word „fugue“ comes from music. In music history the fugue is particularly associated with compositions of Johann Sebastian Bach. (1) The stylistic form of the fugue is the use of uniform thematic material. The first voice introducing a fugue, also known as dux (Lat. Leader), is followed by the second voice, also known as comes (Lat. companion), which elevates the theme into another key, preferably in the fifth. There are often four to five voices, which also sing the theme indifferent keys, this can be in major or minor. As if this were not enough, a further melody is involved, the task of which is to overlay the sound sequences contrapuntally. This means that multiple melodies are sounded at the same time, in polyphony.

The Fugues graphic cycle of Ute Pleuger was created from 2000–2009. The exhibition displays just a small part of it, with four large prints. These are the Simple Fugues #4–7, in each of which one theme is developed and overlaid contrapuntally. The complete cycle comprises 58 prints, in addition to the Simple Fugues there are a number of Double and Triple Fuguesconsisting of multiple prints, even a Large Triple Fugue of seven prints and at the end a Quadruple Fugue, the four themes of which blend into the same print and are overlaid contrapuntally. If we assume that the musical sound sequences are actually the starting material for the graphic composition of all prints, we are unable to trace this notion back in order to be certain. The graphic intention of the artist lies not in the traceability of fugues, but rather the ability to represent them visually. Because there is no doubt that there are limits to an equivalent translation of music and image, Pleuger strives to measure out these limits for herself. Her project intends more than mere metaphoric, as all artistic forms of expression are directed towards the person as a whole.

Similar to fugues in music, Pleuger developed a conceptual framework for her graphic fugues, with which she regulates the translation of the compositional principle of the fugue from music into the image. As the artist has dispensed with the linear form of musical scores, the time line so decisive for music is lost. Instead of this, the white screen of paths open in all directions, spatially expanding the theme of the fugue from each point and consequently imitating the number of voices or elements at the same moment, like in a choir. As a result, all prints of the graphic series are covered by an even image rhythm, even extending beyond the large formats, as the edges of the sheets are sharp. Dux and comes are distributed like a net, resulting in them becoming double gangers in both roles, depending on the point at which our eyes begin searching for links or similarities between the elements. The beat of their distribution is determined by form and dimension. With the image structure manageable to this point, the contrapuntal overlaying of a further melody, a cautiously persistent encroachment on the image structure as a whole, creates irritation within the system or, to be precise, its particular graphic complexity. Briefly resembling a geometric issue, on closer inspection the arrangement reveals itself to be a visual consonance of a number of voices, never experiencing the same situation identically, only approximately. All elements listen to one another and appear with one another, although none of them is prepared to give away to others. This visual arrangement in black and white conceptually illustrates the style characteristics of the fugue, the ongoing imitation of the theme in polyphonic permeation.

The dimensions of the prints mean their presence in the room is considerable, with the broad spectrum of graphic “sound colors” highly effective. What, apart from intuition, could it have been that made Pleuger select precisely these elements from which to form Fugues and not others, or, the counter question, why others when it could have been these? The approximately ten years must have been busy ones for Pleuger as she worked on her cycle of graphic “scores”, cutting the partial motifs from linoleum by hand for all 58 prints, before subsequently printing them by hand. A strong motif is a prerequisite in view of the immense scope of work on the fugues. The artist’s great proximity to and love of music throughout her life can be referenced here, as she has stated. (2) This cycle is very evidently the expression and content of personal identification.

Back to PicturesPublicationsBack to biography 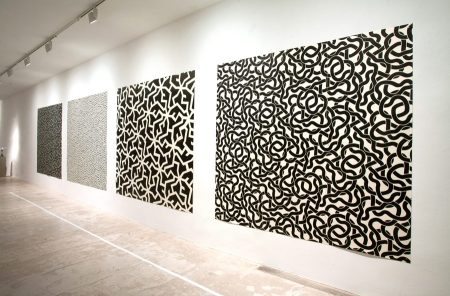