The unusual intensity, which characterizes Ute Pleugers paintings, comes from both irritation and paradox. Her paintings of faςades have a massive quality but also a transparency, they look abandoned but don’t seem lonely, they encounter the observer as static objects, but also appear as phases of the movement of a great repetition. Without a privileged location, the observer is caught up in a world that fascinates us by eliminating everything human. Ute Pleugers images renounce any anthropomorphic standard and they acquire the glamor of a world that no longer carries the imprint of any subject. The images reveal a distanceless and intimate encounter, an expérience intérieure.

Ute Pleuger found the source of her formal language and her different standard in the music of Bach and Buxtehude. She studied organ on her own during her professional training at the Hochschule der Künste in Berlin. So it is no accident that the painting Paris Facade 1984 originally was entitled Fugue, and another painting is called Passacaglia, and that a twelve-drawing series to Messiaen’s La Nativité du Seigneur for organ is also to be found in her works. In fact, Ute Pleuger’s paintings possess a mathematical sensuousness which is stimulated by the large forms found in Bach and Buxtehude. One might even recognize an intimacy with polyphonic music in the inclination to expansive forms and the repeated linear-parallel superstructure: the rows of windows make us think of the many voices in a fugue, while the shutters also create imitative connections. The facades resemble so many music scores.

The facade has become the master subject of Ute Pleuger’s painting. The history of her already 10-year-long wrestling with this theme is also the history of its reductive transformation.

The external cause was the view from a Berlin backyard house on a small courtyard and the facade opposite it. In 1984 and 1985 then, a series of over 100 monochrome gouaches on packing paper with everchanging variations of the same view originated in Paris. These small-scale works live from the contrast between the space of the observer, present in the clearly delineated window transom and the observed faςade, which constantly changes in tandem with the light of the day and is transformed into an intense and strictly ordered inwardness. A constructive, but at the same time, urgent glance creates in theses gouaches a reflected, iridescent tension between the inner and the outer.

But her oil paintings are different. Her large facades do not stick with the opposition of construction and inwardness, of the window transom and the external house wall, but they inscribe the construction into the faςade itself. The object becomes more strongly seized by rational, constructive penetration instead of being opposed to it. The object itself achieves prominence. The window transom and the whole world of the observer are diminished and shrink into a shadow writing inscribed on the faςade across from them.

If in the gouaches the observer speaks for herself, in the sense that she is represented by the view on a facade rather than by the faςade itself, the oil paintings on the other hand work emphatically with the aspects of the facade itself: the windows, the shutters, the curtains, illuminated by the afternoon sunlight, point to the human beings who live behind the facades, signs of their inhabitants as if accidentally inscribed there on the facades.

A second look at the early facades recognizes the same constructive, universalizing gesture that captures the theme. Vertically, the rows of windows organized like lines of text create a clearly linear movement like writing; horizontally, the different sections of the buildings emphasize their block-like proportional order. Moreover, the large-scale figures are broken up into different parts. The segments of the facades, in asymmetrical order but strictly mathematically calculated, seem to force themselves out of their frame. The facades are no longer just abstract buildings but a rhythmical mass. The handling of the theme has gone beyond exact observation and become penetrated by a musical formal imagination.

In the later paintings, in the cycle Houses on the Slope (1987–88) and the facades of 1989–90, the naturalistic elements disappear. The shadow writing of the observer’s house-front as well as the play of shutters and curtains are renounced; transoms and ledges are lost. The facades become more are more obviously serial in nature. All the elements of the image become integrated in the constructive plan of the whole. The facade is no longer an occasion for naturalistic signs: no light now illuminates the object. Both merge into a monotonous movement of serial, identical elements. But the dynamic of this linear movement runs empty and turns into stasis, its opposite.

The central point of view of the observer also is dissolved. The facades, which seem to run into infinity like the parallel perspective of medieval paintings, lose their distance and move closer to the observer; at times they are magnified as if under an imaginary microscope, push out against the frame and seem to loom over the observer. In this way the impression arises of a space that is uniform, overwhelming and inescapable.

This twofold disappearance—that of the seeing eye as well of that which is seen, the absence of human beings and even of the signs that point toward them—corresponds to the withdrawal of the expressive subject from the act of painting in Ute Pleuger’s works. The absence of the subject is not only the theme of these works, it even extends to the way the materials are handled. Every expressive gesture is avoided. A unique technique which rubs, rather than applies, thinned-out color onto an acrylic undercoat allows the traces of the brush to become virtually invisible. Layers of color of luminous transparency appear instead of strokes. The compact solidity of the object thus becomes dissolved; the facade becomes an imagination upon the porous material surface of the canvas.

All together: the progressive reduction and transparency of the facade, the serial repetition of the basic elements in identical form, their linear sequences of equal validity, without climax, the enlargement of detail, the absence of humanity—combine to make the facades into overwhelming and fascinating, imaginary but extinguished, objects. The transformation of this theme does not discover new dimensions of the object, on the contrary: what is represented here closes itself off and goes silent. And there is where the paradox of Ute Pleugers works resides, the paradoxical art of a rediscovered but intimate strangeness. 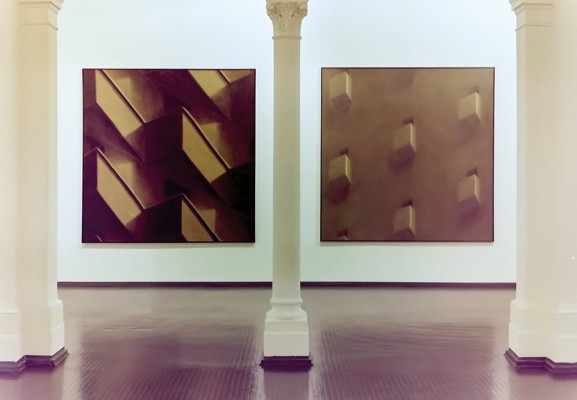