“When was Nature ever abolished in art?”
— Nietzsche

With the titles Suspension (Landscapes from Wiepersdorf, Brandenburg 1996–97) and Atlas of New Nature (2000–01), Ute Pleuger characterizes two wide-reaching, chronologically sequential cycles of her work. When she completed her cycle Serial Spaces: “City Landscapes” in the second half of the 90s, consisting of standardized architectural motifs of construction and housing, stamped half-tone pictures, and painted patterns, she next turned to the genre of landscape painting in the Suspension, but then, in her latest creative development in the Atlas, she returns to the prototypical individual forms. She is no longer developing her formal repertoire out of the “constructed world” of architecture, but out of the constitutive forms of nature.

The landscapes that originated in Wiepersdorf—about 300 images in the unfolding of the cycle—speak of a meditative, newly intensive experience of nature, which is reflected more in inward images than in representative reproductions: these are flat compositions, strictly partitioned into dark and light zones, with a suggestion of great depth and tranquility, bordering on abstraction. Infinite emptiness dominates, as far as the eye can reach, and time and space collapse into each other. The formal similarity of her painterly gesture replaces the patterned structure of her earlier forms. Using minimalistic means, such as the narrow stripes of light and dark on the edge of the flat spaces, a spatial illusion is produced in the image, which evokes in the observer a memory of things seen: landscapes, which, depending on topology, vegetation,utilization, time of day or season, demand categorization. Places, without orientation. Spatial order is suspended: now, after the austere patterned and linear composition of her earlier architecture, with these landscapes, Ute Pleuger opens up new horizons for herself: an expansion of the space and themes of her work. The choice of the title Suspension—reminiscent of Thomas Bernhard’s novel The Elimination—gives intuitive testimony of her doubts about the received concept of the landscape genre in contemporary art. In this way Ute Pleuger stresses “Horizons at the End of Nature and Art” (1), which can only be taken up and overcome as a subject for painting within a more global concept.

Ute Pleuger carries out this next phase in her work on the cycle The Atlas of New Nature, which originated at the beginning of 2000. Two-dimensional space takes the place of the deep-space composition of the “emptiness” of her Wipersdorf landscapes. Now the surface of the image is filled by sculpturally elaborated serial individual forms, comparable to fantastic microorganisms, newly discovered basic elements of archaic or future life-forms. The wealth of her formal invention seems endless: spirals and knots, cephalopods and protozoa, tetrapods, threadworms, snails, tubular and spherical beings. This myriad production of a “new nature” through art contains both utopian and threatening elements, which emerge in previously unknown and bizarre shapes. New species and mutations continually arise and occupy the worlds of the images like an army. None of these beings resembles any other, yet each one seems to know its own structural design and to take form following its own plan, its artistic “DNA.” They do not correspond to any external observation of nature but are an artistically and artificially created “new nature.” Perhaps they are creatures of a successful experimental protocol? But this process takes place, not in the laboratory, but in the artist’s studio. Here one can finally see how narrow is the dividing line between the “artistic” and the “artificial,” between art and natural science.

It is no accident that this Atlas of New Nature of Ute Pleuger originates at the beginning of the 21st century, which started with pioneering discoveries and creations of biotechnology, the emergence of bioethics, and the decipherment of the human genome: a challenge confronting the sciences as well as the humanities. A paradigm shift is also observable in the arts, in which the primacy of the historical element, so prominent and meaningful in the art of the last two decades of the 20th century, is yielding to the primacy of “nature.” Art must now measure itself and relate itself to nature. The notion of “sustainability,” requiring the unity of ecology and economy, is exemplary of this shift. The production of nature (genesis), in the sense of divine creation, and its representation (mimesis) in artistic secondary creation, is no longer the privilege of religion and art but has become a real scientific possibility. What Goethe dreamed of in Faust, when the homunculus was generated in the test tube–(“what mysteries of nature we praised, we now dare to test rationally, and what she (nature) came to form, we shall crystallize”)—has become reality with the cloning of the first living things at the beginning of our century.

Ute Pleuger’s cycle Atlas of New Nature understands itself as a bridge between art and science (2). Although she refers to Aristotle’s attribution to art of the “emergence, development and contemplation” of the phenomena of life, and sees its origin in “the process of producing rather than in describing what is produced,” and conversely attributes to nature that which “by necessity exists or comes to exist,” and therefore has its origin in itself (3), her work demonstrates the consequences of the dissolution of these traditional concepts: a “new nature” is what it is all about, the human ability to produce life on its own. As an “atlas,” this cycle develops a new “cartography” of the previously separate domains of nature, science, and art. And once again, a boundary has been “suspended…”

The linear structure of the forms on the pages of Ute Pleuger’s Atlas recalls the construction of her earlier architectural images. These were normative, geometrical forms, standardized “construction elements” unrelated to time or space, but here, in the cycle Atlas of New Nature, the free invention of new forms dominates, seemingly “organically” grown, natural structures, which in the serial process of painting take on plasticity, individuation, and illusory corporeality, and seem to have a life of their own. The space of the work becomes an “exhibition platform” for these objects of a systematized and classified nature, exemplified in the botanical collections of the art and curiosity collections from the 16th century on.

With the fictitious Latin nomenclature that Ute Pleuger grants to her newly created species, she brings her work into relationship with the system of naming new species developed by Linnaeus in 1735. Labels like Ovum aeternale, Turbo generalis or Monitor moralis refer to archetypal original forms of cellular life, but also refer analogically to recent inventions of technology and media in our information society. The multiplicity of morphological variants in Ute Pleuger’s painted worlds allows historical parallels with Ernst Haeckel’s seminal study Art Forms in Nature (1904), which underpinned Darwin’s investigation of the origin of species, achieved great popularity as a scientific document and influenced the style of Art Nouveau in painting, design, and architecture(4). But unlike Haeckel, who derived all natural forms from symmetrical crystalline structures, and translated them into a merely ornamental, static artificiality, Ute Pleuger, in her analogous art, shows images of the “new nature” as an open-ended process of “a world as a self-producing work of art” (5), constantly renewing and inventing itself. 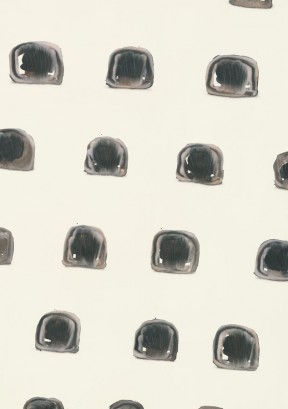