Margarethe Jochimsen: Hearing with the Eyes

An excerpt from the talk given at the opening of the exhibit Ars Viva 85/86—Works with/on Paper in the Bayer Kulturhaus, Leverkusen, on February 23, 1986

Ute Pleuger’s central motif is house façades. Her daily view of such walls through the window of her workroom in Paris impressed itself deeply, becoming a key experience for her, a liberation and a confinement at the same time.

While looking at these house façades, with which she was confronted every day (and still is confronted with in Berlin today), something was brought together in her, which she lived as a conflict, and which she was to experience as two souls in one: on the one side her strong inclination to music, specifically organ music, and on the other side her need for painterly form. One could even say with Kandinsky: her problem was “the unification of the powers of different arts.”

The architectural articulation of the house façades, their serial interruption by windows and sills, evoked in her an association with the principles of order in music, with the scores of that austerely constructed music of the Baroque, with which she was mostly involved. And, in fact, the observer senses the emphatic vertical, horizontal and diagonal lines and beams in her façade and window images as a scaffolding, as a kind of ground bass, in which the mechanism—the melodic development—moves, where the modulating and modelling of the varied subtle color timbres take place, while the brownish base tone of the paper contributes greatly to creating a warm, soft quasi-musical mood.

The temporal dimension of her work becomes particularly clear in her gigantic, comprehensive images, in which, by means of the endless juxtaposition of windows, sills and ledges, rhythms and passages arise, which force the observer to take in these images, just like musical scores, one at a time rather than all at once. The smaller pieces that we also see in this exhibit could be compared to harmonic blocks, which produce a similar effect when seen in a row.

It is interesting that, in contrast to Kandinsky, who also had a strong affinity for music, like many other painters, Paul Klee for example, and who translated his musical impressions into colors and forms in abstract representation, Ute Pleuger always uses the objective stimulus, the objective scaffolding, in order to transform her musical visions into such pre-existing scenarios. It is as if she implied that a totally free translation would be felt as nothing but a whim. One might perhaps say that Ute Pleuger hears with her eyes, while Kandinsky saw with his ears.

Back to PicturesBack to biograpy 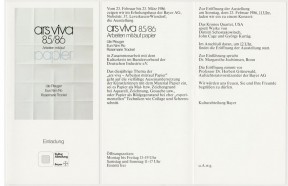