With her large-scale painting Imago, Ute Pleuger focuses on the fundamental question of what makes an image an image. She strikingly exposes the relationship between the total surface area and a complex internal visual organisation. On the background of light Naples yellow, a large number of wave-like, dark blue/violet forms of different lengths can be seen. Their arrangement seems to be based on their own logic or an invisible force, which could be either visual or acoustic, and which is reminiscent of steady, undirected streaming and resounding. The eye, following the rhythm of the waves, is baffled twice: the two colours seem to insistently switch levels between figure and ground as they meet at the sharp, flickering edges. And a roving glance across the image discerns that there are no centres; instead, the waves swirl in different ways against each other without touching, pushing out beyond the edges. In the area-filling “all-overness” of the painting, an inner order and a playful freedom, formal rigour and a fundamental endlessness combine to form a paradoxical image. 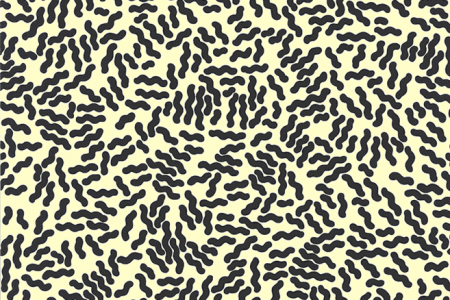