In the Mood for Art and Teaching

Questions by Rike Zoebelein to Prof. Ute Pleuger on the occasion of the exhibit Ten Years Class of Ute Pleuger at the Bayer Kulturhaus in Leverkusen in 2010

Rike Zoebelin: Dear Ms. Pleuger—you celebrated last year the 10 years of your painting class. Congratulations! You can be proud of the fact that many of your students have become established in the art market. What, in your opinion, has changed in the 10 years since you began as a professor of art?

Ute Pleuger: The class which I took over in 1999 was mainly from the local area. I opened it up for students from the entire world, who nowadays make up a third of the class. Through a new concept of teaching, with work discussions in groups and several class events and excursions I have brought about an ongoing debate on art within the class, which has contributed significantly to the cohesion of the group and the progress and individuation of the individual students. Commitment and discretion have been important factors in my collaboration with the students. Individual consultations as well, in which important personal matters relevant to their work can be discussed, form an essential ingredient of the painting major and master’s programs.

Before I was invited to teach at the Burg its painting class hardly made an impression beyond the region. Halle was not considered, for example in Berlin, a place for a good program in painting. That has changed. Now there are, besides the class exhibits, a good many individual exhibitions and participations in exhibits, which—mostly in close collaboration with me—came about through the students’ initiative. In the meantime we can now look back on several fellowships and prizes, and we are proud of our seven fellows of the “Study Foundation of the German People”. Moreover we enjoy increasing interest from cultural institutions, press, and television. Not to mention the flood of applications: last year we had over 120 applying for only 5 places.

RZ: What do you recommend to beginning painters: Which qualities must one have in order to study painting?

RZ: How do you rate the current state of the German universities of the arts? What is positive and what needs improvement?

UP: Art does not happen according to a calendar. I hope that the German universities of the arts can continue to succeed in resisting the pressures trending to regimentation and academic uniformity in the Bachelor’s and Master’s programs. We are already swamped with examinations—and that in a field in which judging talent by grades and points is fundamentally problematic. And future artistic success has nothing to do with one’s grades at the university!

But also, the pressure of the art market should be kept at a distance from the university. The students are confronted far too early with questions about their positioning and their strategies for material success. It is only natural that they are concerned about the potential sale of their works during their studies, for their life circumstances are often characterized by urgent financial needs given the scarcity of fellowships. That is not however productive for their studies. For even a modest financial success wants to be repeated and with that, the student’s artistic development can come to a halt. In art, and especially in the study of art, it is not about creating products, but about intellectual freedom and deregulation.

RZ: In your opinion, what is the most important part of teaching?

UP: The guidance toward self-criticism and mental independence.

RZ: What are the greatest challenges for the students in your class? Where should they be supported and promoted the most?

UP: The lack of orientation in the art world reflects that of the society at large. I am thinking of the longstanding debate about values and the loss of standards. But art can itself represent orientation. This realization is actually quite simple, but it does not occur spontaneously. To guide the students on their way to this realization is in my opinion one of the most important supports.

RZ: Your work and your involvement with the art of painting inspires your students, but do they inspire YOUR work?

RZ: What would you like your students to take with them when they leave?

UP: Everything that I know and that I can do.

RZ: We are happy to have the exhibit of your class at the Bayer Kulturhaus in Leverkusen. Thank you very much.

Back to teachingBack to biography 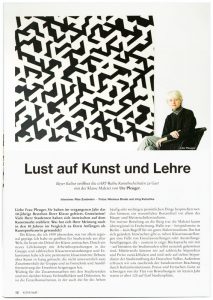